Running Short of Potato Starch? Here are Some Good Substitutes

From baking to frying, the gluten-free potato starch has become a key ingredient. If you run short of potato starch on the spur of the moment, you can use cornstarch instead. Tastessence further gives you some more options to substitute potato starch. 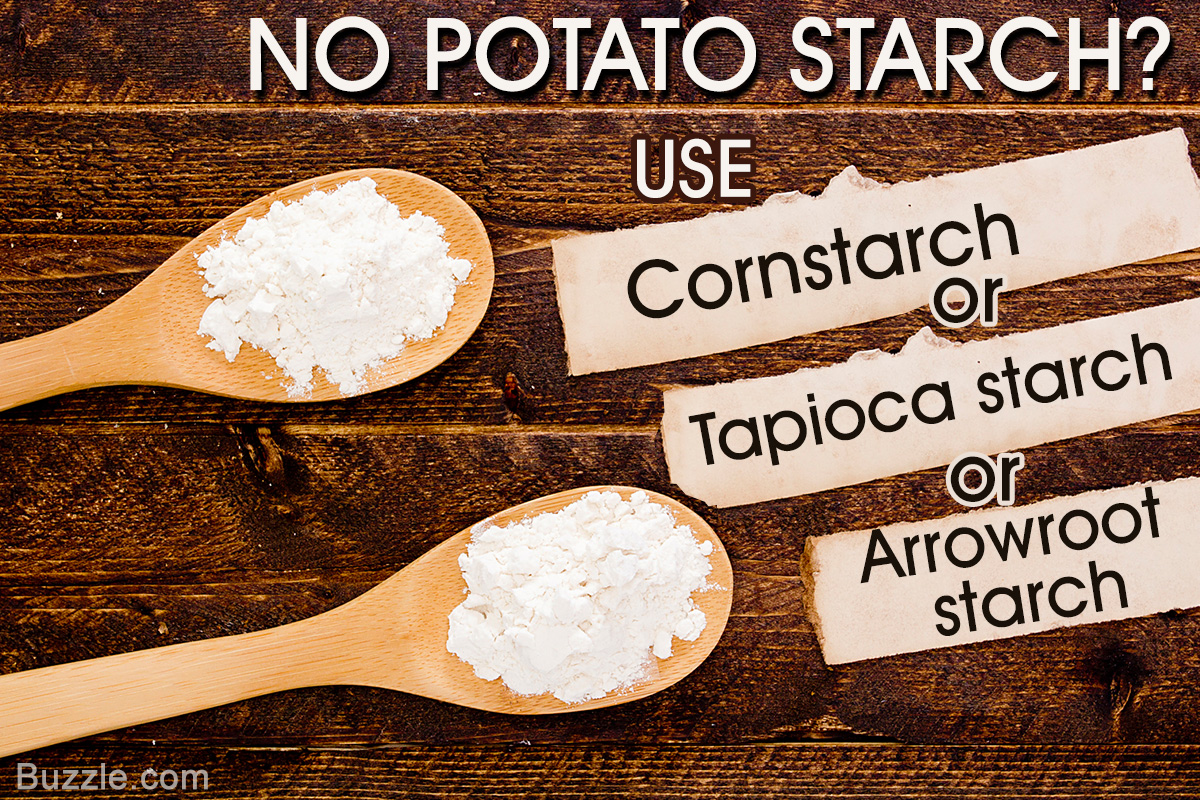 From baking to frying, the gluten-free potato starch has become a key ingredient. If you run short of potato starch on the spur of the moment, you can use cornstarch instead. Tastessence further gives you some more options to substitute potato starch.

Potato flour is a creamy, heavy ingredient that has a potato-like flavor; whereas potato starch has a neutral flavor and is gluten-free. They are NOT interchangeable!

Potato starch is a fine, white powder starch. It is gluten-free, and provides a transparent gloss to foods. It has a bland taste so can be readily used as a thickener without changing the flavor of the recipe. Potato starch is most commonly used to thicken gravies, sauces and stews, pie fillings and puddings. Since it is fat-free, it lightens baked goods, giving them the needed fluff.

But if you’re running short of potato starch, you can use the following substitutes. Though we can never find an exact substitute for any ingredient, the ones listed below have a resemblance with potato starch, both in flavor and texture.

Tip: Best for dairy-based sauces; can be used to coat fruits in desserts

Nature of the substitute: This thickening agent has the most neutral taste of all the starches. It is pretty much interchangeable to potato starch. It renders a glossy finish to foods. It can tolerate prolonged cooking and recipes that include acidic ingredients. Avoid using it to thicken dairy-based sauces, as the recipe may get too slimmish. This starch is slightly expensive.

Tip: Best for acidic liquids; and foods that call for freezing

Nature of the substitute: If you want to correct your sauce just before serving it, and have no potato starch with you, then tapioca starch would serve the purpose. This gluten-free starch thickens quickly, and gives a glossy sheen to food items. It is used to lighten baked items imparting a chewy texture.

Alternate names:
Equivalents: 2 tbsp. for a cup of liquid

Nature of the substitute: Rice flour is comparatively a weak thickener. If a recipe calls for potato starch, and you have none of the above-mentioned substitutes, then use rice flour. It is slightly gritty, and heavier than arrowroot and tapioca starch. It is commonly used to thicken stews and soups.

Tip: Best for recipes that require refrigeration or freezing

Tips for working with Starch

✦ Before adding starch to any recipe, mix it in equal amounts of cold water and make a paste. This will avoid lumps.
✦ Never boil the liquid containing starch, as this will make the sauce slimy again.
✦ Since starch imparts a glistening sheen to foods, it may give an artificial appearance to sauces and gravies.