Home / Substitutes / What Are the Best Saffron Substitute Options?

As one of the priciest spices in the world, saffron adds a sweet and earthy taste to many dishes, but it’s not the most cost-effective option. Fortunately, there are several cheaper spices and ingredients that you can use as a saffron substitute to save yourself some money.

In this post, we’ll share a bit more about saffron before diving into a few alternatives. Take a look to find out if you’ve already got a saffron substitute stashed away in your pantry.

With its origins in the Mediterranean, saffron is a spice used in dishes such as paella, risotto, and bouillabaisse. It’s a deep red color and is sold in thin strands, with a pound of saffron costing as much as $5,000.

What can you use as a saffron substitute?

It’s challenging to replicate the taste of real saffron since it has a floral yet grassy taste that’s difficult to identify. However, there are a few easy saffron substitutes that you can use in a pinch.

Far and away, turmeric is the most recommended saffron substitute available on the market. This golden-hued spice is extraordinarily nutritious and is famous in India for its medicinal properties. It’s also the ingredient that gives certain curries their yellow appearance.

In terms of turmeric as a replacement for saffron, you’ll want to use a bit less than the recipe calls for. You should also mix it with a pinch of paprika. The flavor of turmeric isn’t exactly the same as saffron, so start off with small amounts before committing to it.

Cardamom is another Indian spice that’s often used in all kinds of recipes, including sweet and savory dishes. It has an earthy and sweet flavor (some people think it tastes like mint) that isn’t quite the same as saffron, but it can pass as a saffron substitute in certain foods.

Some South Asian recipes, including pilaf, desserts, and tea, use both cardamom and saffron. When substituting cardamom for saffron, start slowly and taste as you go. Keep in mind: you can add more if you don’t have enough, but you can’t take it out after it’s added.

Known as “Mexican saffron,” safflower is a close match to saffron in terms of color. That’s despite the two ingredients coming from different plants. As a result, safflower does a pretty good job as a saffron replacement when it comes to coloring food. However, the two ingredients don’t taste exactly the same.

To use safflower as a substitute for saffron, add an equivalent amount based on what the recipe requires. It can be difficult to find the plant itself in stores, but supermarkets like Whole Foods sometimes sell safflower seed oil.

When it comes down to it, finding a saffron substitute is possible, but you’ll struggle to find a precise match. However, the three options above should help you get close enough. This is particularly true for baked goods, where the flavor isn’t as prominent.

For more recipe tips and ideas, check out the Tastessence blog. 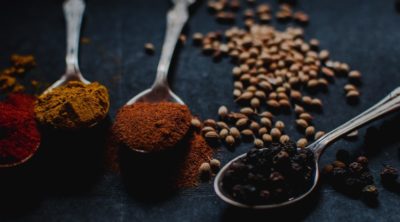 Six Top Tips to Get Your Seasoning Perfect