Baklava History: Know How This Yummy Dessert Traveled and Evolved

Baklava history can be traced back to the 8th century B.C, when the Assyrians first baked it in their wood-burning ovens. From there, as the recipe traveled out to the neighboring countries, it picked up the uniqueness of the lands it crossed. 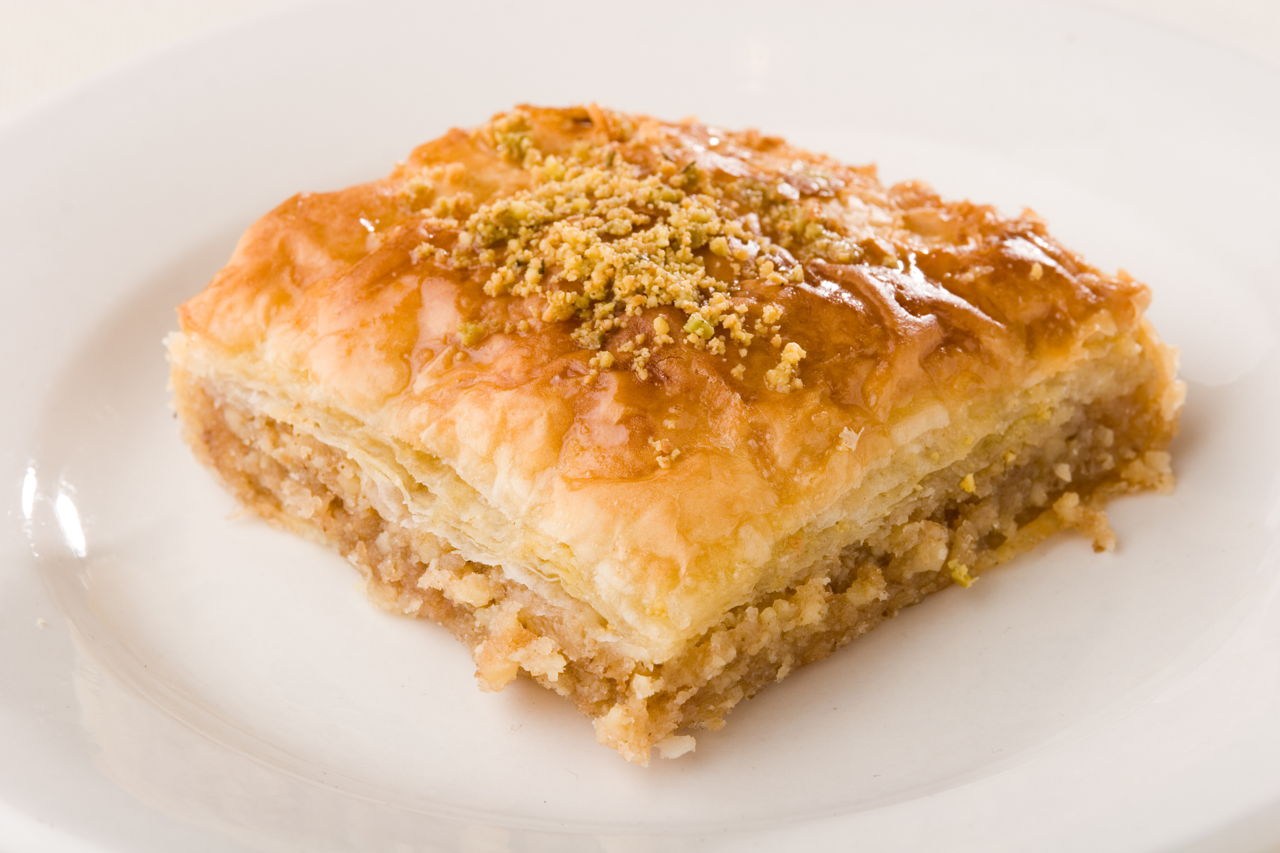 Baklava history can be traced back to the 8th century B.C, when the Assyrians first baked it in their wood-burning ovens. From there, as the recipe traveled out to the neighboring countries, it picked up the uniqueness of the lands it crossed. 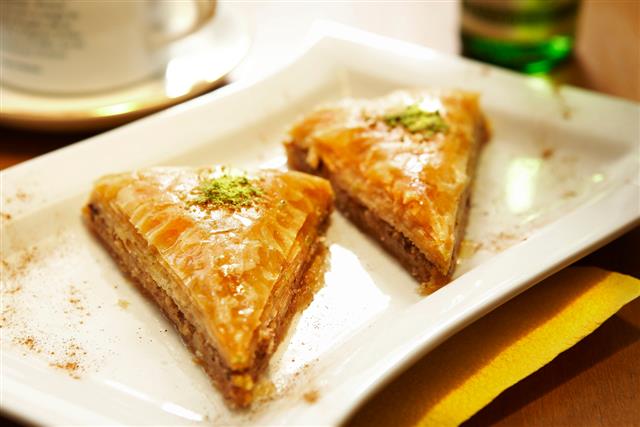 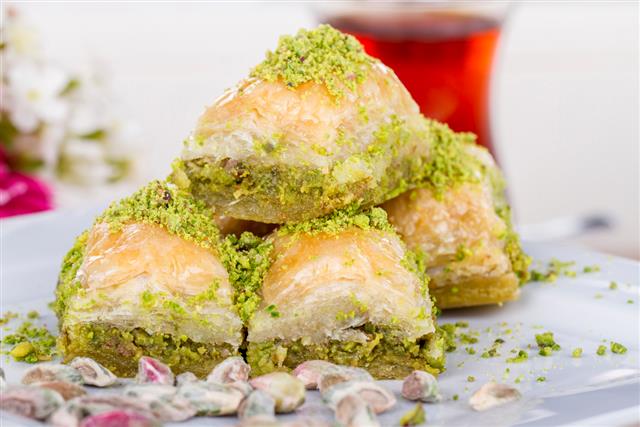 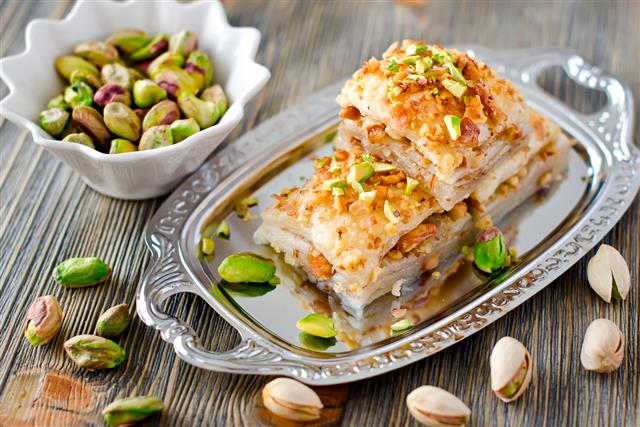 Baklava is a pastry, rich in nuts and sweetened with honey. It was once exalted to the status of becoming a food for the rich and the aristocrats. It is now a sumptuous treat that is greatly enjoyed with a cup of freshly brewed coffee. It originated in the 8th century, somewhere in the Middle East and Mediterranean region. Like most ancient things, the history of this dish is also mired with controversy, regarding who were the first people to bake it. Although, many countries lay claim to its discovery, it was the taste that lured foreigners to carry the recipe back home with them. As it traveled over plains, hills, and the sea, it carried with itself a touch of the spices and culinary specialties of every culture, on its journey through different lands. Baklava’s history is just as intriguing as the history of the silk route, through which it is known to have traveled to reach Armenia and further on.

It is most widely believed that it was the Assyrians who first made this delicious pastry in the 8th century B.C. They baked a few layers of dough with chopped nuts in between. It was prepared in ovens that were fueled by burning wood and a thick syrup of honey was also added in order to make it sweet. Mesopotamia was frequented by the seamen and merchants from Greece. They soon discovered the delight of this delicious dessert and thus, it traveled out of it’s land of birth into Athens. The contribution of Greeks towards this dish is significant. They devised the technique by which the dough could be rolled into paper thin layers, as opposed to the coarse, bread-like texture of Assyrian bread. These paper thin sheets were called ‘Phyllo’ or ‘fillo’, which means leaf in Greek. By the 3rd century B.C it became a delicacy for the wealthy families in Greece. The recipe reached Armenia through the Spice and Silk route. They added cinnamon and cloves to it. As the recipe was revealed to the Arabs, they contributed the use of rose water and cardamom to it. This recipe traveled west from its place of origin into the kitchen of the rich Romans and then became a part of the Byzantine cuisine, where it remained popular till the end of the empire in 1453 A.D. In the meanwhile, it also worked its magic on the Persian rulers.

In the 15th century, the Ottoman empire conquered Constantinople, the entire kingdom of Armenia, almost all of Assyrian lands, and some western provinces of the Persian kingdom. The kitchen of the Ottoman rulers employed chefs and artisans from all the newly conquered lands and in almost all of this new empire this dessert was baked, albeit with slight variations. The cooks interacted with each other and perfected the art of making several variations of this dish. What made it gain royal status in the Turkish kingdom is the fact that its ingredients, mainly honey and pistachio, were believed to have aphrodisiac properties. The spices like cardamom for men, cinnamon for women, and clove for both genders were added as per the sex of the consumer, as specific spices were believed to enhance sexual performance of specific sexes.

Under the rule of the Ottoman empire, the art of making baklava had almost been perfected. As the empire opened up to Western cultures during the 18th century, the chefs from the West made certain changes and additions in the way this dessert was presented. It was brought to America by the immigrants from Greece and the Middle East. Today it is commonly served in the restaurants of all these countries.

The sweetness of this dessert often makes people wonder about its calories. However, this pastry is extremely nutritious. The nuts that are used for preparing it are good for heart. They are a rich source of fibers and minerals like magnesium, copper, vitamin E, and folic acid. Walnuts and almonds are good for blood cholesterol levels. Walnuts are a rich source of omega 3 fatty acids and they reduce the risk of heart diseases.

This dessert is the outcome of successive additions of culinary specialties, as it traveled from one culture to another. The result is that, it is packed with the goodness of the spices and nuts of the Middle East and Mediterranean region and scores high on the taste quotient due to generous use of honey. 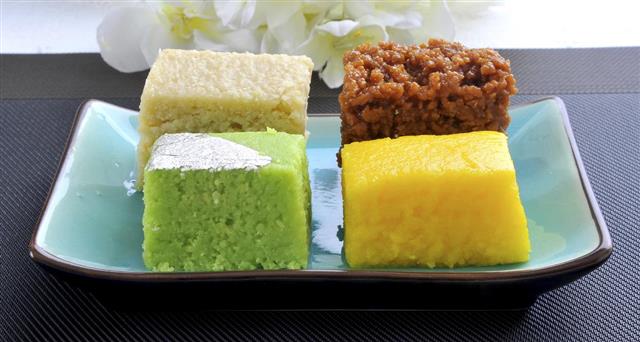