Do you know which is the best part of beef for a specific culinary purpose? Or which is the softest or hardest part? We will tell you all about various types of beef cuts and which cooking method to employ for each of these cuts. 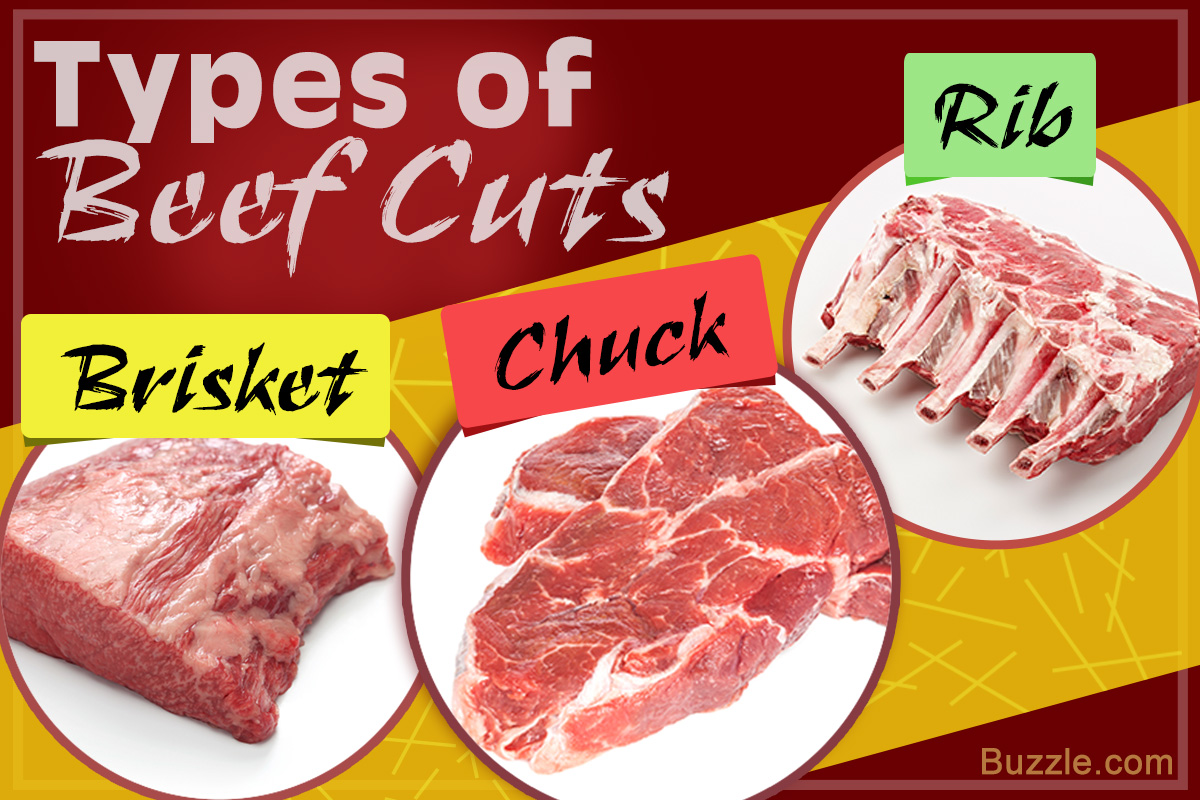 Do you know which is the best part of beef for a specific culinary purpose? Or which is the softest or hardest part? We will tell you all about various types of beef cuts and which cooking method to employ for each of these cuts.

Have you ever wondered why beef sometimes is very tender to eat and sometimes it is very hard? This is because of the difference in the beef cut. The entire beef is divided into different parts according to the types of meat we get. Different countries have different styles of cutting beef, like in America there are normally 12 kinds of beef cuts.

You can enjoy beef roasts, steaks, and ground beef but you will get the real taste only when you cook the right part the right way. For this, you need to understand the different beef cuts which will also tell you about the nature of that particular part. Here we are going to give you information on American beef-cut portions.

This is one of the most economical cuts of beef. It consists of the frontal shoulder part which is quite lean and muscular. It is about 1-inch thick and is also known as “7-bone steak”. It is a bit tough and is recommended to be cooked on low heat. It should be cooked properly as it has lots of connective collagen. Chuck steak and roasts are very famous for their flavor. It is often used in hamburgers.

This is the lower chest and breast part. It is a tough portion of meat which is hardly compromised in the flavor department. It can be cooked in different ways but it requires a slow-cooking method. Smoking, stewing, braising, slow roasting, barbecuing, etc., are some of the methods of cooking it. It can be bought whole or in the form of a flat cut.

It comes from the rib area of the beef and consists of 6 to 12 ribs. It is usually tender and highly flavorful. It is usually roasted in a upright position. The steak parts are the ribeye steak and prime rib. They taste great when grilled or broiled. You can relish it with the names of rib roast, rib eye roast, ribeye steak, boneless rib steak, etc.

It is also known as the skirt cut and is found at the bottom of the brisket. It is tough but quite flavorful. They are usually served in the form of steaks. It can be found under the names of hanger, butcher’s steak, hanging tender flank, inside skirt, outside skirt, etc.

This part is among the tender cuts of the beef. This is the muscular part which is present along the sides of the spine. You can get these cuts in the form of streak. As they are not much flavorful, they are usually marinated or heavily seasoned when cooked.

This is a triangular part which is found near the flank of the beef. It is less tender but can be braised, broiled, baked, or slow-cooked. It has a robust flavor and hence, it is used in many recipes. You can get them as flank steak, flank steak fillet, etc.

This part is hard as it is composed of the most exercised muscles of the cattle. It is the cheapest part of the beef. It has a strong flavor and tastes great when grilled or pan-fried. You can get this part under the names of pin-bone, round bone, beef loin, flat-bone, bottom sirloin butt, etc.

This is the most tender part of the cattle. It has very little fat and hence, is one of the most expensive parts. Because of the low-fat content, it should not be overcooked as it tends to then become very hard and tasteless. It tastes best when roasted at an optimum temperature and with proper ingredients.

It is a part of sirloin which is tender than the rest of its parts. Hence, it costs a bit more than normal sirloin. It can be found under the name of top sirloin cap.

It is the rear part of the beef which is less tender than the sirloin. It is usually cooked on low heat in order to keep it tender. This roast may be found under the names of bottom round, pike peak, round tip and rump, etc. They may also be available in the form of steaks as thin cut, beef sirloin, London broil, etc.

This is the muscular part of the leg of beef. It is very low in fat but is tough. It needs to be slow-cooked for a very long time. It is not a very popular meat portion, but it is used to make low-fat ground beef dishes and soups.

It is the bottom of the sirloin part which is connected to the top sirloin. It is a large part and is less tender. It is used in making sirloin tip roast in which the meat remains tougher than most other meat portions even after cooking but tastes divine. It is also used in making steak and is famously called ball-tip steak.

So, these are 12 types of beef cuts found in America, whereas the Britons have 14 types and the Dutch 11 types. So, next time when you go to buy beef, refer to this article in order to determine which part will serve your immediate culinary purpose better.