10 Substitutes for Pepperoncini Peppers to Work as Alternatives

Mild and slightly bitter pepperoncini peppers lend a crunchy texture and a refreshing tangy taste to the dish. If you do not have these peppers, this Tastessence article will help you find an alternative for them. Most recipes taste well with pepperoncini pepper substitutes.

Mild and slightly bitter pepperoncini peppers lend a crunchy texture and a refreshing tangy taste to the dish. If you do not have these peppers, this Tastessence article will help you find an alternative for them. Most recipes taste well with pepperoncini pepper substitutes. 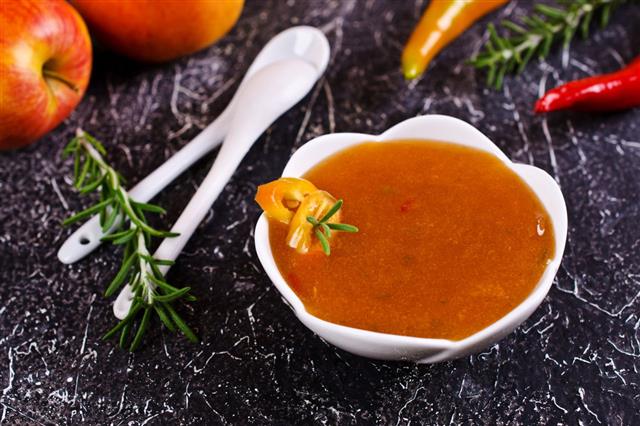 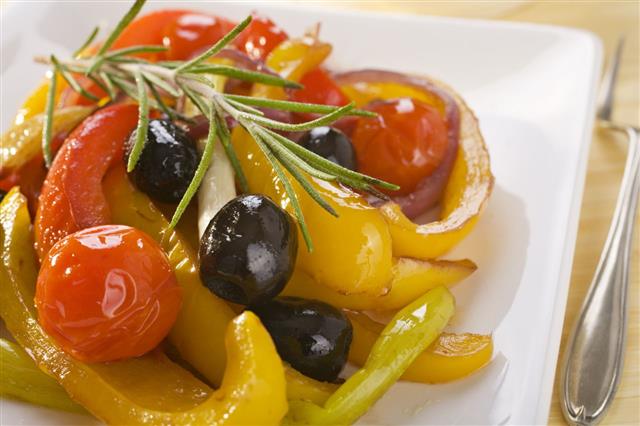 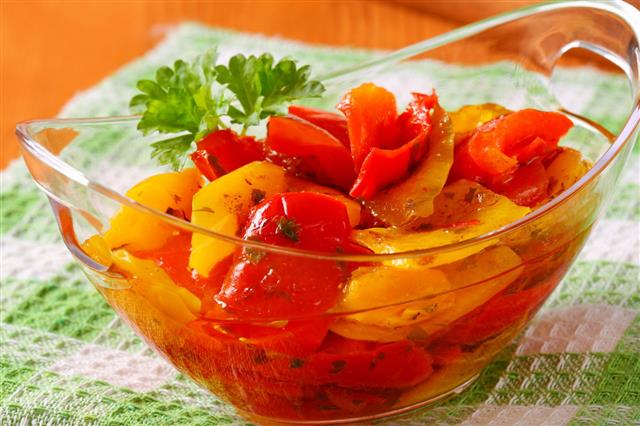 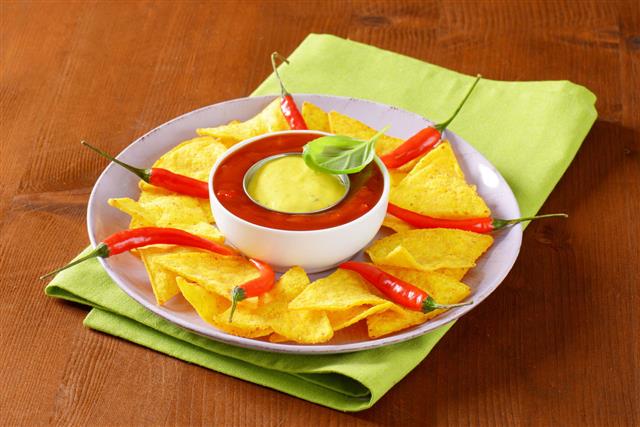 Half a cup of chopped or diced chili peppers contain more vitamin C than orange. Moreover, chili peppers are loaded with vitamin A, beta carotene, and capsaicin. All these nutrients help prevent chronic heart diseases and certain cancers.

In Italy, the term ‘peperoncini’ (singular peperoncino) indicates hotter varieties of chili peppers. However, in the U.S., the term ‘peperoncini’ is used for sweet Tuscan peppers. In Italy, the term ‘peperone’ (plural peperoni) indicates sweet peppers. Pepperoncini (or peperoncini, as in American English) are 2-3 inches (5-8 cm) long, mild, bright green, wrinkled peppers which turn red on maturity. Usually, they are sold pickled. These tangy, salty, and crunchy peppers are used to enhance the flavor of a sandwich, pizza, salad, casserole, or an antipasto platter. Matured pepperoncini (red ones) have a little stronger flavor. Many recipes call for bright yellow, yellow-green, or red pepperoncini peppers. If you don’t have them, don’t panic.

There exist a variety of sweet and mild peppers. The species Capsicum annuum comprises a wide variety (cultivars) of bell peppers and chili peppers that come in different shapes, colors, and flavors. The Scoville value for pepperoncini peppers is 100-500 SHU (Scoville Heat Units). You may choose mild, sweet, or moderately hot peppers, and changing the quantity, you can use them in place of pepperoncini peppers. Chili peppers with 0-2500 Scovilles are considered as sweet or mild. Those with 2501-15000 SHU are considered as medium. Peppers with more than 15000 SHU are medium hot, hot, or super hot.

List of Pepperoncini Peppers Substitutes
1. Banana Peppers: 0-500 SHU
Banana pepper is often considered as a good substitute for pepperoncini pepper. Banana peppers are sweet, long, and tapered. As the name suggests, they are banana-shaped. They can be pale or deep yellow. They turn orange or red as they mature. They are mild, sweet, and tangy. The most ripe peppers are sweeter than the younger ones. Pickled banana pepper rings can add color and zest to a pasta primavera salad.
2. Poblano or Ancho Peppers: 1000-2000 SHU
These are shorter (about 4-inch long) and slightly hotter than the pepperoncini peppers. They are widely used in the Mexican cuisine. A poblano tapers to a blunt end. The shape is almost like a cone. The fresh poblano is dark green while a ripened poblano is dark red or brown. Their thick walls make them great for stuffing. Dried poblano are called ancho chiles.
3. Cherry Peppers: 100-500 SHU
Like pepperoncini, this is a good pickling pepper. Cherry peppers are also known as pimiento (or pimento). In Spanish, pimiento means ‘pepper’. This is a bright red, heart-shaped, 3-4 inches long pepper. It is mild and sweet to taste and is commonly used to stuff olives. Plump, vibrantly colored, pickled cherry peppers come with a lusty flavor and perk up antipasto platters.
4. Anaheim Peppers: 500-2500 SHU
The variety called ‘Anaheim’ looks like ‘pepperoncini’. This is a mild variety of the New Mexico chile pepper. It is moderately hot. It is also known as California chile or Magdalena. The dried chili is called ‘chile seco del norte’. It grows to 6-10 inches and is one of the most common chiles in the U.S. It is named after the Californian city of Anaheim. Ortega is a variety of Anaheim chili pepper. You can use these chiles in hamburgers, meatless patties, or in omelets.
5. Trinidad Perfume Chili Peppers: 0-500 SHU
Trinidad perfume chili pepper comes with very little or no heat. It is about 1 to 1.5 inches long and 1.25 inches wide. This green chili turns bright yellow as it matures. When cooked, it gives off a delicious perfume-like scent. It is slightly tangy too. It’s beautiful aroma, and fruity (melon and apricot) and smoky flavor makes it ideal for mild dishes.
6. New Mexico Peppers: 500-10000 SHU
The new Mexican green or red (matured) chili looks like the Anaheim chili. It is used in stuffed rellenos. These chiles are more flavorful than the Anaheim chiles.
7. Rocotillo Peppers: 1500-2500 SHU
These peppers are native to Peru. They are about an inch long and wide. They look like tiny bell peppers. These small and spherical chili peppers come in vibrant colors, for example, red, orange, or brown. They attain these colors on maturity. Unripe rocotillos are green or yellow. They are known for their fruity flavor.
8. Cascabel Peppers: 1000-2500 SHU
This is another wonderful chili that is produced in Mexico. It is also known as guajones, coras chile bola, and rattle chile. This plump, round, smooth, and small chili ripens from green to red. The seeds of the dried chiles make a typical sound when shaken. Dried chiles are more common than the fresh ones. They come with a woodsy, acidic, and slightly smoky flavor.
9. Cubanelle Chili Peppers: 0-1000 SHU
These yellowish-green colored chiles ripen to red. They are picked green and are used in salads, casseroles, and pizzas. They are about 4-6 inches long and 2 inches wide. They have a smooth, lustrous, and firm skin. These banana-shaped (tapering near the bottom) chiles are perfect for stuffing. These are also known as Italian Frying Peppers because they are often fried in olive oil. In the Dominican Republic, they are called ají cubanela.
10. Red Pepper Flakes
Red pepper flakes (crushed red pepper) are made from a variety of chili peppers. Any type of pepper flakes can be used as a substitute for pepperoncini pepper flakes. In Asian markets, you can easily get the flakes. You may have to adjust the quantity according to the heat content of the flakes. In certain salads, you can use a small amount of peperoncino-infused olive oil instead of flakes. Dried pepper flakes contain highly concentrated heat, so use them sparingly, just a pinch or two, depending upon the food quantity.

Although there exist several substitutes for pepperoncini peppers, what you are cooking will determine what you can use.

Like pepperoncini peppers, other chili peppers are also low in calories and fats, and high in vitamins and antioxidants. They help relieve the symptoms of cold and sinusitis. Compounds in chili peppers help lower muscle and joint pain. They promote eye and heart health and can improve your health in several ways. So, without thinking much about the type of the peppers, incorporate them in your regular diet.