A shark's fin is not something very easily available in the market. Nevertheless, the dishes made from shark's fin have always been among the most relished delicacies in China. In this article, I would like to put before you, the recipes for a few of the most expensive delicacies of Chinese sea food.

A shark’s fin is not something very easily available in the market. Nevertheless, the dishes made from shark’s fin have always been among the most relished delicacies in China. In this article, I would like to put before you, the recipes for a few of the most expensive delicacies of Chinese sea food.

Shark’s fin soup, shark’s fin omelet and braised shark’s fin soup with crab meat are the most expensive dishes to be present in a Chinese banquet. Shark’s fin is nothing but a soft tissue. Its cost is proportional to its length. The length of a shark’s fin can vary from an inch to a foot. The cost also depends on the amount of cartilage. Shark’s fin in itself is tasteless but has a strange capability of enhancing the taste of anything that it is cooked with. In the market, shark’s fin is normally available in two forms, namely; frozen and dried. Dried shark’s fin needs to be tenderized before using in the food recipes.

Procedure
The chicken breast and the mushrooms are shred first and the scallions are cut into two inch sections. The ginger pieces are then sliced to very small pieces. The sliced ginger pieces, the scallion stalks, the canned shark’s fin, sherry and water are then boiled together, in a pan for around 15 minutes. The shark’s fin is then drained out, while the liquid, scallions and ginger root are discarded. Then stir fry the chicken pieces in the oil for around one minute, until they lose their pinkness.

The shark’s fin, remaining sherry, and shredded mushroom pieces are added to the fried chicken pieces and boiled for around 30 minutes. Salt is sprinkled over during the boiling process. The amount of salt to be sprinkled, depends on the maker’s taste. Cornstarch is then the preparation to thicken the soup.

Ingredients
The main ingredients are ½ a cup dried shark fin, hot chicken stock, six eggs, 2 tablespoons of scallion stock, 1 cup stock, 2 slices of ginger root and 2 tablespoons of sherry. Pepper and salt are needed to spice up the preparation. 4 tablespoons of oil is needed for the frying process.

Procedure
The shark’s fin first needs to be tenderized. It is soaked in cold water for an hour and the water is then drained out. The ginger roots are then cut into very small pieces and the scallion stalks are sliced into 1 inch sections. The tenderized shark fin is then combined with the stock, sherry and salt and pepper. Salt and pepper is added as per the taste desired. Scallions and ginger root are stir fried in the oil for a few minutes.

The preparation of shark fins is then added to the pan and cooked for 5 minutes on medium low heat. The remaining liquid, scallions and ginger root are then drained out from this preparation. Then beat the egg and pour it over this shark fin mixture. It is allowed to settle down on the preparation. It is repeatedly tossed and turned. The care should be taken that the omelet is moist, but not runny.

It is the slippery and glutinous property of shark’s fin that causes its soup to be extra thick. In many restaurants cornstarch or potato starch is not even added to the soup. From a health perspective, shark’s fin is believed to strengthen the internal organs. Though the killing of sharks is banned all over the world, but shark’s fin, till date, continues to remain one of the most relished Chinese food recipes ever. 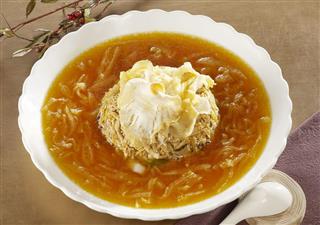 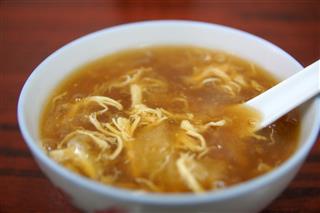