Meatloaf is one of the most popular dishes in the United States. Let us have a look at some recipes that you can try at home. 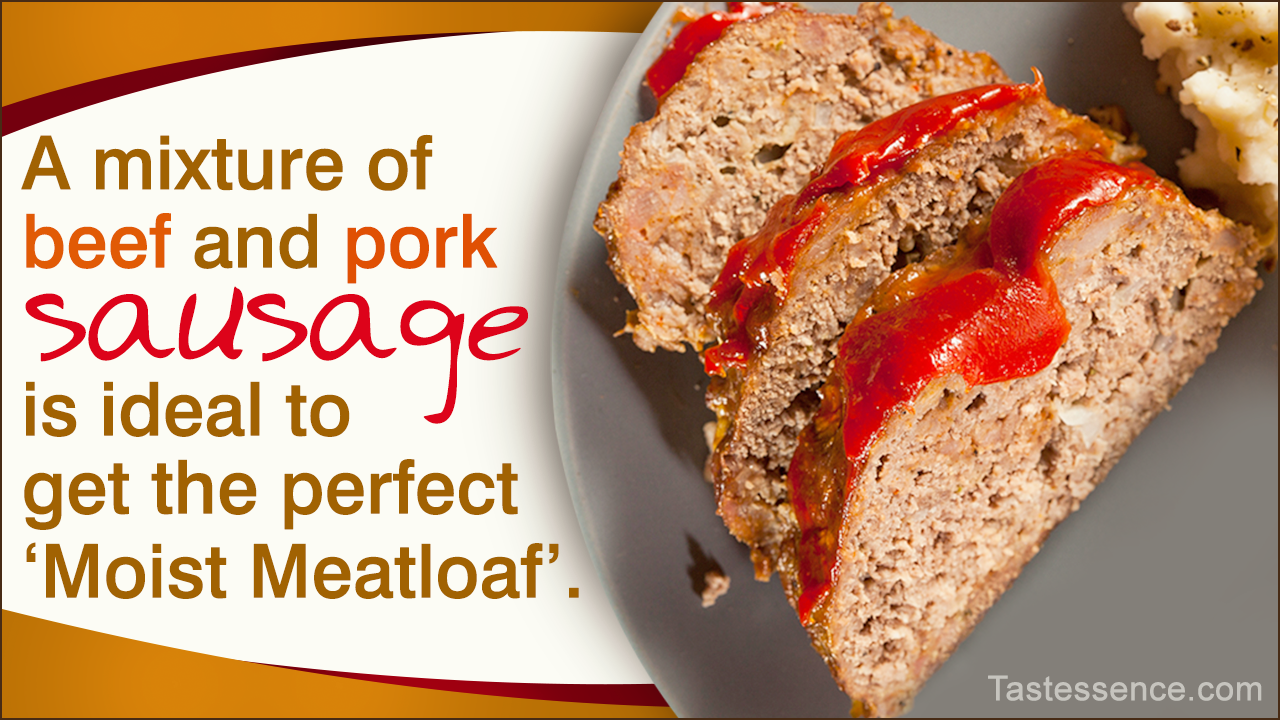 Meatloaf is one of the most popular dishes in the United States. Let us have a look at some recipes that you can try at home.

Meatloaf originated during the 5th century in Europe. It is a dish that consists of seasoned ground meat in the shape of a loaf. It is cooked by baking or smoking. The American recipe is versatile and can be cooked with a combination of meat, herbs, vegetables, and cheese, and is usually topped with a desired sauce. Following are a few home-style recipes that you can serve your family in the comfort of your own home.

Preparation
Take a large bowl, and add the ground beef and pork, eggs, breadcrumbs, parsley, mustard, paprika, salt, and cold water; mix it well. Flatten the mixture in the shape of a square. Place whole hard-boiled eggs in the middle, in a row and fold the sides to cover the eggs. Shape it to resemble a bread loaf. Heat oil on a flat oven dish and place the loaf on it. Bake the loaf in a Dutch oven, until browned from all sides. Uncover the oven and arrange the bacon strips on top of the meatloaf and gradually pour beef broth over it. When cooked, place it on a platter and serve it warm.

Sauce Preparation
Dissolve the cornstarch in ¼ cup of tap water and add it to ¼ cup of boiled water. Cook the liquid in a saucepan until it turns thick; stir continuously to ensure no lumps are formed. After 5-10 minutes, remove it from the heat and add the sour cream. Season it with salt and paprika. Serve hot with the sauce as an accompaniment.

Preparation
In a skillet, cook the bacon until it turns brown; place it on a paper towel to drain the excess fat. Sauté mushrooms and onion in the same skillet, in the bacon fat. Preheat the oven to 350 ºF. Keep a tablespoon of Swiss cheese and bacon aside for the dressing. In a bowl, mix the cooked bacon, beef, egg, Swiss cheese, milk, cornflake crumbs, and the mushroom-onion mixture. Shape the mixture into a loaf and bake it until its brown. Sprinkle the reserved bacon and cheese and bake again, until the cheese turns bubbly. Let it cool for 10 minutes before slicing.

Preparation
In a large bowl mix all the ingredients, except the brown gravy mix. Shape the mixture into a loaf and pour the brown gravy over it. Bake until its cooked Serve hot.

Preparation
In a large pot, boil the potatoes with salt and pepper until cooked. Mash them well, making sure there are no lumps. Heat the butter and cream in a small pan. Add it to the potatoes and season the mixture with salt, pepper, and chives. This potato filling can be added to any meatloaf recipe. 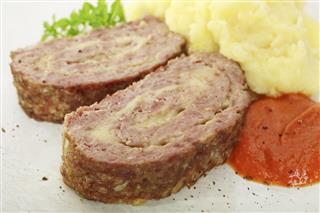 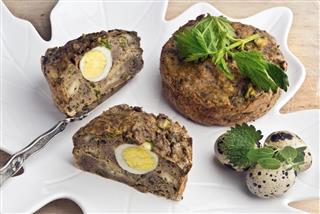