It is true that eggs give a special touch to baked foods, but this does not mean that we cannot make cakes, muffins, and other delicacies without them. There are many substitutes for egg white which can be used in food as well as for other purposes.

It is true that eggs give a special touch to baked foods, but this does not mean that we cannot make cakes, muffins, and other delicacies without them. There are many substitutes for egg white which can be used in food as well as for other purposes.

Eggs are not only a rich source of proteins, but an important ingredient in cooking, especially in baking, where they act as a leavening agent. They help make baked goods lighter and fluffier. Eggs also add moisture and help bind the other ingredients of the recipe. Some recipes call for whole eggs, while others require only the white portion, i.e., the egg white.

A large section of the population prefer to avoid eggs for myriad reasons. Some having egg allergy cannot consume this food for health concerns, while others prefer to skip this ingredient, especially the egg yolk for its cholesterol content. Vegetarians or vegans on the other hand, avoid all animal products, including eggs and foods prepared with them..

The egg yolk and the egg white perform different functions in a recipe. The protein present in the egg white takes in air and traps bubbles, when it is beaten. In cooking, it helps bind the ingredients, besides acting as a thickener. In baking, it acts as a binder and helps raise the food being baked. It is really difficult to replace beaten egg whites, which serves as the base in some scrumptious desserts like meringue and angel food cake. In general, the more egg whites a recipe calls for, the more difficult it is to replace them. For recipes that do not call for a large quantity of egg whites, you can try the following substitutes.

To be substituted with: 1 tablespoon ground flaxseed + 3 tablespoons water

Note: Ground flaxseed can be used as an egg white substitute in cakes, cookies, breads and muffins. Due to its earthy taste and nutty flavor, flaxseed especially works well in bran muffins, pancakes and oatmeal cookies. But, they acts as a laxative when taken in large quantities, which should be kept in mind while using it in a recipe that calls for a large quantity of egg whites. In such recipes, the amount of flaxseed required to replace egg whites can be reduced by adding agar powder.

Agar or agar agar is a gelling and stabilizing agent derived from a type of red algae. Commercially, it is commonly available as a powder. It is mainly used in desserts and soups as a thickener. It is also used as a gelatin substitute by vegetarians or vegans. To replace egg whites, you have to mix agar powder and water in the ratio of 1:1.

Note: While substituting egg whites with agar powder and water, be sure to whip the mixture, chill it in the refrigerator, and then whip again. Whipping can help you get an egg-like consistency, but you can get a fluffier texture only by alternating between whipping and chilling. Agar powder can replace egg whites in custards, puddings, and other desserts.

Chia seeds are obtained from the flowering plant, Salvia hispanica, that belongs to the mint family. They have mucilaginous quality like flaxseed. They can soak up a large amount of water. They are healthy substitutes for egg white when packed with omega-3 fatty acids and calcium. By mixing ground chia seeds or chia flour with water, you can get a texture similar to egg whites.

To be substituted with: 1 teaspoon ground chia + 2 tablespoons water

Note: After mixing ground chia and water, keep the mixture undisturbed for 2 to 3 minutes. Then whisk the mixture for 15 to 20 seconds before using it to replace egg whites in the recipe. This substitute can be used in puddings and smoothies. It can also make excellent cookies, muffins, cakes, brownies, and breads.

While strolling the baking section of your supermarket, you might have already come across meringue powder. It is actually a powder made from dried egg whites, cornstarch, gum, sugar, cream of tartar, and a few other ingredients. This powder can substitute fresh egg whites in some recipes. It is usually used for making meringues and angel food cake.

Xanthan gum is used as a thickener in food and as a stabilizer in cosmetics to prevents the ingredients from falling apart. The fermentation of glucose or sucrose gives xanthan gum (a polysaccharide secreted by bacterium Xanthomonas campestris). It’s used in commercial egg substitutes containing egg whites (without yolk). It attains the consistency of egg white, when mixed in water.

Note: To make the mixture of xanthan gum and water fluffy, allow it to thicken for a while, and then whip it for a few seconds. Besides being a thickener, xanthan gum can act as a leavening agent in baking. You can use it to make smooth and creamy ice-creams. You can also incorporate it in your quick bread, cake, muffin, cookie, and bar recipes.

To sum up, ground flaxseed, agar powder, chia seeds, and xanthan gum are some good substitutes for egg whites. Non-vegetarians can also go for powdered egg whites. But this substitute cannot be used by vegans and people allergic to eggs. The success of a substitute depends to a great extent on the number of egg whites being substituted, and the functions of egg whites in that particular recipe. Always consider these two factors while replacing egg whites in a recipe. 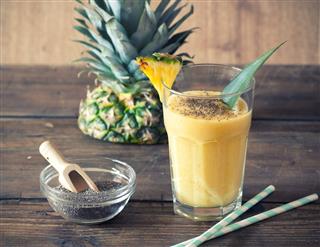 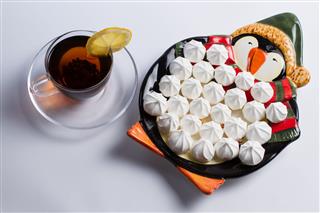 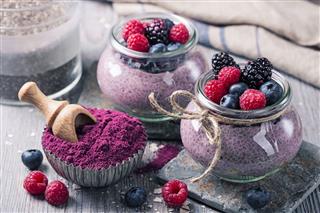 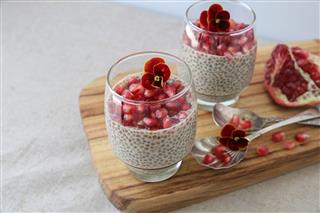