Ever wondered why food is named in a particular way. No, not really, because we are so busy relishing the delicious platter. It may be surprising to most of you that some of the most popular and yummy dishes are actually named after famous people! Want to know more? 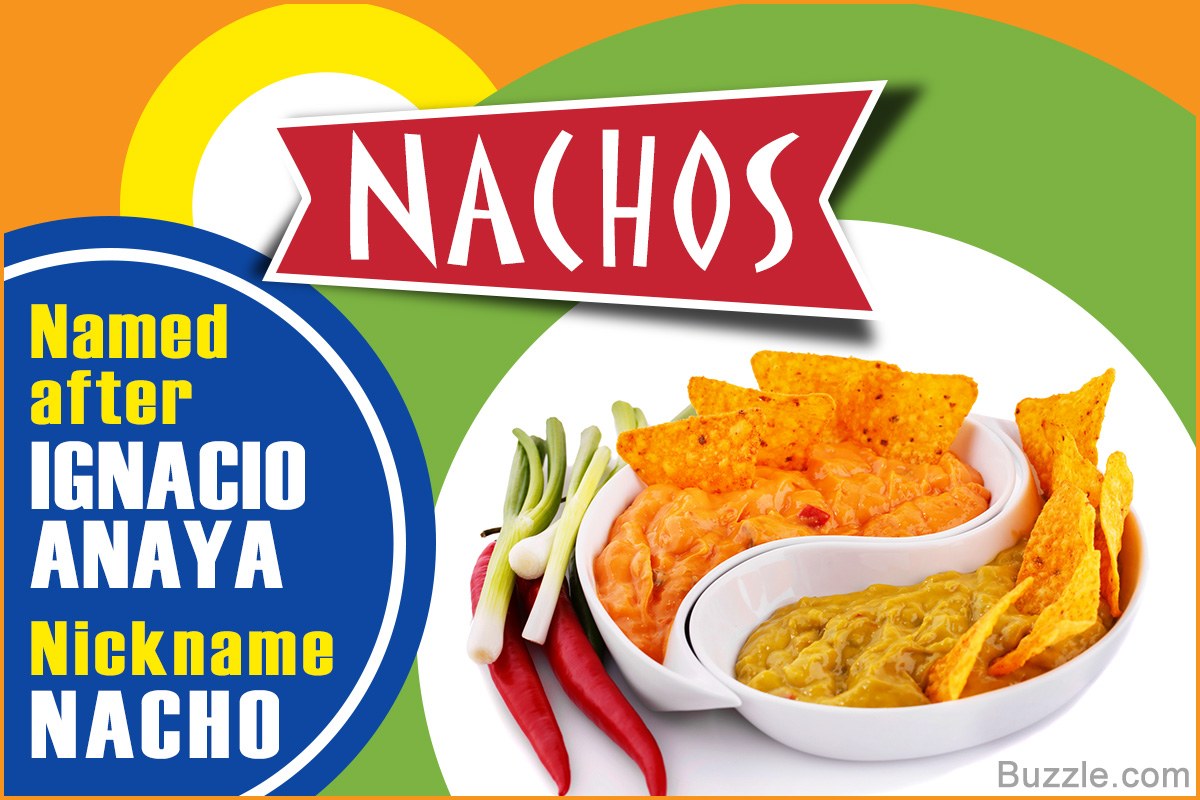 Ever wondered why food is named in a particular way. No, not really, because we are so busy relishing the delicious platter. It may be surprising to most of you that some of the most popular and yummy dishes are actually named after famous people! Want to know more?

It’s amazing how pervasive food is. Every second commercial is for food. Every second TV episode takes place around a meal. In the city, you can’t go ten feet without seeing or smelling a restaurant. There are 20 foot high hamburgers up on billboards. I am acutely aware of food, and its omnipresence is astounding.
— Adam Scott, The Monkey Chow Diaries, June 2006

We all love food. Each time we order a specific dish, we know it is not the ‘name’ that makes it delicious. Perhaps, food and its name have been taken for granted by us. We hardly bother why a Margherita pizza is called ‘Margherita’? Or why a triangular, crispy Mexican delight is called ‘Nachos’? Interestingly, every time that you bite into this pizza or enjoy a generous melting of cheese on nachos, know that you are actually relishing a slice of history and fame; a dish that has been named after somebody famous.

Hungry already? We at Tastessence take you through a gourmet list of delicious foods named after celebrities and famous people. Scroll down for a relishing treat!

While there are many recipes named after famous people and even celebrities, here is a list of the top 25 of these delicacies. And yes, we treat you to a visual delight too with the names!

Back in 1937, Bob Cobb, the owner of a Hollywood restaurant called Brown Derby, invented this salad. We go by the story which says that Bob happened to throw random ingredients in a bowl, as he wanted a midnight snack, and voila! He created a delicious salad named after him!

In 1889, the Queen – Margherita of Savoy and her husband, King Umberto were traveling in Naples. A chef named Raffaele Esposito made three special pizzas for the royal couple at his restaurant. The Queen loved the pizza made with tomato, basil, and mozzarella over others, which also mimicked the colors of the Italian flag. The chef then named the pizza after the queen, and the recipe is still followed.

Richard Foster, the Chairman of New Orleans Crime Commission, would often head to a famous restaurant named ‘Owen Brennan’s’ owned by his friend with the same name. In 1951, the chef created a new dessert with bananas, rum, and ice cream. He named it after Richard Foster who was a regular customer and also Brennan’s friend.

According to legend Arthur Wellesley, the Duke of Wellington won the battle of Waterloo in 1815. He became a public hero after that, and his chef created a dish specially to honor him. This dish also looked similar to the Wellington boot, hence the name.

Most people confuse this dish to have been named after the famous king Julius Caesar; however, that does not stand true. In 1924, on the weekend of Fourth of July, Chef Caesar Cardini was falling short of food in his restaurant in Tijuana, Mexico. He found some basic ingredients in his kitchen, like olive oil, parmesan cheese, lettuce, egg, etc. He quickly assembled all in a bowl and tossed them to make a delicious salad. The dish has earned fame since then.

In 1894, Lemuel Benedict, a New York stockbroker, went in a hotel named Waldorf for breakfast. He wanted something that could cure his hangover. So, he ordered a customized dish which included bacon, toast, hollandaise sauce, and poached eggs. The chef improvised on the ingredients and also added the dish to the restaurant’s menu. Thus was born, ‘Eggs Benedict’.

Yeah, you heard it right! There actually was a person named Nacho! In 1943, a boy named Nacho was working at a club in Piedras Negras, Mexico. The club was located close to the border of Eagle Pass, Texas. One fine evening, a bunch of soldiers and their wives turned up for dinner, but the club was short of full food for all. So, Nacho quickly cut tortillas in pieces, sprinkled them with cheese and jalapenos, and popped them in the oven. The dish earned a lot of fame and was named after ‘Nacho’.

Luisa Tetrazzini was a famous Italian opera singer. She frequented a restaurant in America, and during that time, it was a popular tradition for food items and dishes to be named after the person that they are inspired from. The chef there created this dish and named it after Tetrazzini to honor the star who was a nationwide sensation!

In the early 1920s, Reuben Kulakofsky invented this sandwich at his restaurant named Omaha in Nebraska. He made it for his poker group friends, and the delicacy became famous. Another story talks about a New York restaurateur Arnold Reuben inventing this dish for an actress named Anna Selos. However, he called the sandwich Reuben special.

In 1892, celebrity chef Auguste Escoffier created a dessert for the famous opera singer, Helen Porter Mitchell (stage name: Nellie Melba). The story says that Nellie, who was performing in Covet Garden, sent tickets of her performance to the chef. The following evening, he created this special dessert for her, which resembled the swan boat in her opera, and named the dessert Peach Melba.

In 1886, James Salisbury invented a dish which included only ground beef. He believed that eating meat every day would keep people healthy and disease-free. Irrespective of the motive behind the invention, the dish became extremely popular. He thus parted his name to his delicious creation.

In 1914, this Italian Chef wanted to create a dish for his wife who was feeling weak after giving birth. To help her regain strength, he created a creamy sauce adding cream, cheese, and butter. He added Fettucini pasta to the sauce. The dish was extraordinarily tasty and was named after the chef.

During the time of Napoleon III, Chef Adolphe Dugléré created a dish with layered sliced potatoes and lots of butter in a famous restaurant in Paris. He named the dish after a great woman of that era. Now, there are three names that contest for this fame till date. Records state that it is named after Anna Untel, others believe it was Anna DesLions, while some also state that it was actress Anna Damiens (better known as Dame Judic) that this dish was named after.

Around the year 1950, this beef delicacy was invented in Harry’s bar in Venice. It was initially made for Contessa Amalia Nani Mocenigo, a regular at the restaurant, as she was advised to eat raw meat by her doctor. This dish was dedicated to and named after Venetian painter Vittore Carpaccio. The beef used in this dish is thinly sliced, and the redness of this beef resembles the red hues that the painter created in his artwork.

During the 16th Century, a nobleman from Italy – then living in Paris and who was a member of the Frangipani family, Marquis Muzio Frangipani – introduced almond scented gloves for King Louis XIII. The gloves were a huge rage. The dish was named after him.

During the 20th century, a chef named George Greenwald invented a dish specially for the owner of the hotel. The owner, E. Clark King and his wife loved the chicken delicacy and asked the chef to add the dish on the menu. The Chef then named the dish after the owner, and hence the name – Chicken à la King!

Sacher torte was invented in 1832. The prince of Austria, Prince Klemens Wenzel von Metternich, wanted to treat his guests to a special dessert. The head chef, however, was ill and so he asked his 16-year-old apprentice cook named Franz Sacher to create something. The young teenager baked a delicious treat, which is now named after him.

The famous novelist was staying at the Savoy hotel, which is where he was completing his novel. During his stay, the chef’s made him a special omelet. The Novelist loved it so much that he insisted that it be made wherever he traveled across the world. The omelet has since taken his name and is still served at the Savoy hotel.

Anna Pavlova was a famous Russian ballet dancer. She has her name to a delicious meringue-based dessert called the pavlova. The story says that this dish was invented in the 1920s in New Zealand, when a chef at Wellington hotel made this dessert inspired by the ballerina’s visit. Another story says this dish was invented in Hotel Esplanade in Perth Australia, where the dancer was a guest.

This dish is also called ‘the king of salads’. It was invented in America on the western coast, during World War I, while another story states that this dish was invented way earlier and was named after King Louis XIV, considering the enormous amount of food that he could possibly eat!

During the 19th Century, two sisters invented an upside-down dessert named ‘tarte tatin’, in their restaurant in France. The invention story is interesting, which says that Stephanie overcooked the apples and tried to cover the same by laying pastry base on the top! Thus was invented the delicious French dessert.

These high-fiber crackers were invented in the 19th century by Presbyterian minister Sylvester Graham. The story behind the invention is a little cheeky. According to Graham, eating a high-fiber snack could lead to healthy and pure thoughts. This, in turn, could tame sexual urges, which would eventually keep people healthy! And hence the invention which had his name.

According to history, this cake was invented in 1852 in America. Sam German invented this cake for Baker’s Chocolate Company in 1852, who then named the cake after him. The cake took the name as Baker’s German’s Sweet Chocolate and was later known by German chocolate cake.

Suzanne was a famous French actress known by the name Suzette. In 1897, she appeared on stage serving crepes. These were provided by Monsieur Joseph, owner of Restaurant Marivaux. To attract the attention of the audience, he decided to flame the crepes. The dish was since named in the honor of the actress.

We hope you enjoyed and relished this list of foods crowned with a famous name. So, the next time you order any of the above, rest assured it is going to be doubly delicious. And what’s in its name? Well, an appetizing story for sure!