Common Types of Delicious German Sausages Everyone Should Know

Think Germany, and the three things that instantly come to mind are football, beer, and sausages! Well, it's time to know more about some of the most delicious sausages that the Germans relish. Take a culinary journey across Deutschland, through this Tastessence post. 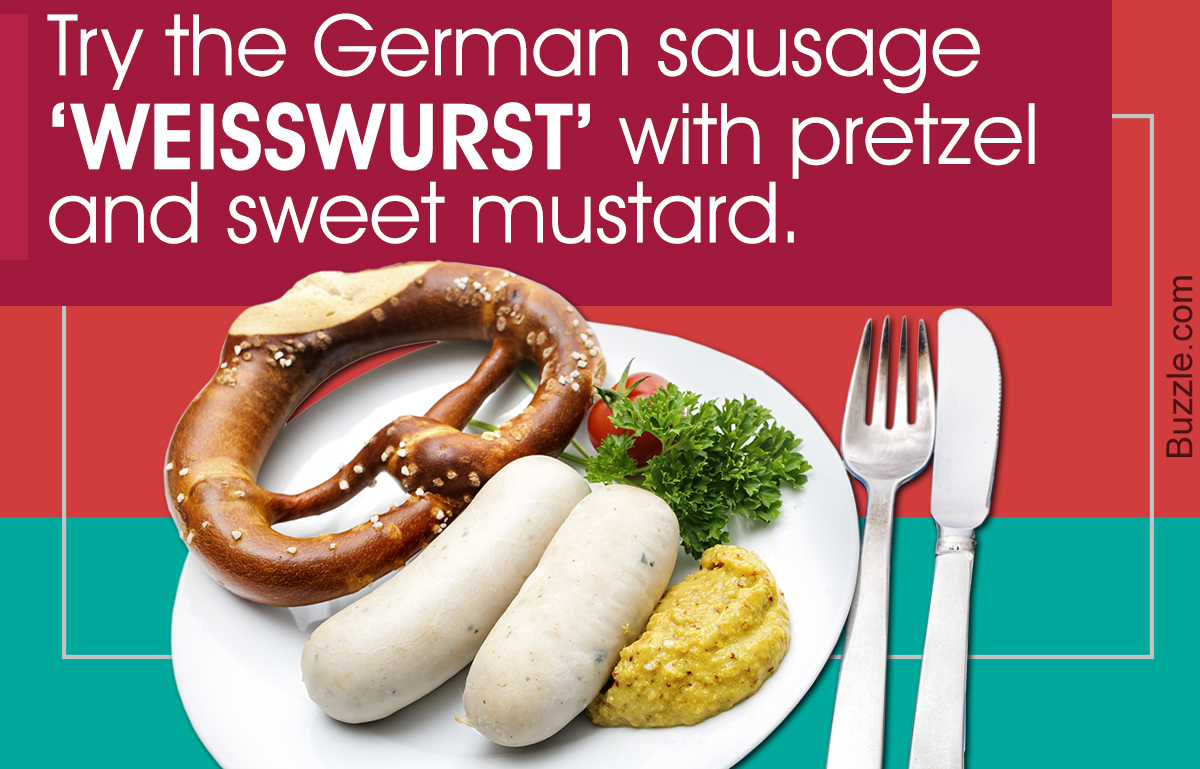 Think Germany, and the three things that instantly come to mind are football, beer, and sausages! Well, it’s time to know more about some of the most delicious sausages that the Germans relish. Take a culinary journey across Deutschland, through this Tastessence post.

There are more than 1,000 different varieties of sausages in Germany! Beer, bread, and sausage; that’s the perfect combination, we say!

Sausages can be described as the perfect snack food. And, they are an absolute staple for Germans. It shouldn’t be a surprising fact, since there are so many varieties available here.

Sausages are nothing but cured meat cased in animal skin. Most sausages are made from pork, beef, or veal. Common seasonings include white pepper, salt, and mace. Other herbs and spices differ from region to region. The Germans savor their sausages with hot, spicy, or sweet mustard. A variety of breads like soft, dense, whole-wheat, and multigrain accompany these delicious sausages. Another favorite accompaniment is the sour and healthy sauerkraut.

In the accompanying sections, we’ll discuss some of the common types of sausages in Germany.

▶ Bratwurst is usually made of veal, pork, or beef.

▶ It can be cooked in beer or broth, and then pan fried or grilled.

▶ It tastes best when eaten with bread, fries, and tomato ketchup.

▶ There are around 40 types of bratwurst; the ingredients and serving methods distinguish them.

▶ Blut in German means blood. Yes, this sausage is made from pig’s blood, and is absolutely tasty!

▶ It is darker in color, and has a spicy and salty flavor.

▶ It may contain beef along with pork, and fillers like bread and oatmeal are added as well.

▶ It can be heated, but is mostly eaten cold with sauerkraut.

▶ Veal and pork are traditionally used to make a bockwurst, but right from turkey, lamb, chicken, to even horse meat can be used.

▶ In fact, there’s one type of bockwurst made from fish too.

▶ It is flavored with paprika and white pepper, and can be simmered or grilled.

▶ It gets its name since it is eaten with bock beer.

▶ Tastes best when serve with mustard.

▶ Cervelat, though found in Germany and Switzerland, is more popular with the Swiss.

▶ Made from beef, bacon, and pork rind, it can be boiled, grilled, or fried.

▶ It is a semi-dried sausage with a wonderful smoky flavor.

▶ It is usually eaten cold with bread and mustard. You can also enjoy it with a potato salad.

▶ Drei im Weggla literally translates to ‘three in a bun’. And that is exactly what it is!

▶ If a single sausage is not enough to satiate you, then you can have three.

▶ These are absolutely delicious and crispy.

▶ They are grilled for a smoky flavor.

▶ Taste best when eaten with bread and mustard.

▶ Frankfurter Würstchen is the sausage for pork lovers. It is a delicious sausage made of only pork.

▶ It is not cooked, but just heated in hot water.

▶ Taste best when eaten with bread and mustard.

▶ It is also served with kartoffeln salat (potato salad).

▶ Made from veal and pork, knackwurst is a garlic-flavored sausage.

▶ It is a short, plump sausage that makes a crackling sound when bitten into, thus the name.

▶ It is traditionally smoked over wood.

▶ Tastes best when served with sauerkraut and mustard.

▶ Landjäger is a smoked sausage made with equal parts of pork and beef.

▶ It is seasoned with sugar, red wine, and other spices.

▶ This semi-dried sausage can be eaten as is, or boiled and served with mashed potatoes.

▶ Since it stays edible without refrigeration, it makes for a very convenient snack when traveling or hiking.

▶ Although the name leberkäse literally translates to liver-cheese, this sausage contains neither.

▶ It is made with beef, pork, and onions, and looks like meatloaf.

▶ It can be enjoyed in a number of ways: as a cold cut with sandwiches, pan fried with potato salad, or plain hot with mustard.

▶ Only Bavarian Leberkäse actually has liver in it.

▶ It is a spreadable sausage, also known as liverwurst or liver sausage.

▶ It is usually made of pork, and has pig’s liver in it, but there are some variations which use beef or veal as well.

▶ It is spiced with black pepper, thyme, mustard seeds, marjoram, and allspice.

▶ It is eaten with bread and pickles.

▶ Gelb means ‘yellow’ in German. Gelbwurst gets its name from its orange or yellow casing.

▶ It is also known as brain sausage, though brain is not used nowadays.

▶ It is made of pork and veal, and beautifully spiced with ginger and nutmeg.

▶ It is traditionally eaten at tea time with sandwiches, hence the name.

▶ It is made of two parts of pork and one part of bacon.

▶ It has a smoky flavor since it is smoked over beech wood.

▶ It is very spreadable, and eaten with open sandwiches as a snack.

▶ It originates from the Thuringer region, and has a protected status. You can only enjoy this delicacy in Thuringer.

▶ It is made of minced pork, beef or veal, and flavored with garlic, pepper, caraway, and marjoram.

▶ It gets its distinguishing smoky taste since it is roasted over charcoal.

▶ Tastes best when served with mustard.

▶ It is made of minced veal and pork, and flavored with parsley, lemon, mace, onions, ginger, and cardamom.

▶ It is a Bavarian sausage eaten as a snack before noon. It does not contain any preservatives.

▶ It is freshly made everyday and consumed immediately.

▶ Wollwurst is different than most sausages, as it does not have a casing. It can be compared with weisswurst, but is longer and thinner.

▶ The sausage is cooked by simmering, and is fried before eating. This gives it a crispy exterior.

These are the most commonly eaten types of sausages in Germany. If you are visiting, make sure you try all the types that seem to appeal to your taste buds, from this list.