Understand Cajun Food History With Help of These Recipes

Cajun food is a spicy and delicious cuisine, with each recipe having its own distinct flavor. This article discusses the origins of this cuisine, its main ingredients, and some great recipes to try.

Cajun food is a spicy and delicious cuisine, with each recipe having its own distinct flavor. This article discusses the origins of this cuisine, its main ingredients, and some great recipes to try.

Cajun food history can be traced back as far as the 1700s. The people―Acadians and native Americans―were exiles from Canada. After being unfairly treated by the French Aristocracy of New Orleans, they settled down in the swampy marshlands outside the city. They were forced to survive on the meager ingredients that grew in the swamps and the game meats and seafood that were available. The main ingredients of their food involved shellfish, forms of seafood like turtles and alligators, and game meats like duck, turkey, chicken, and pork. Among these, shrimp and crawfish became the most popular. These dishes were served with steamed rice, which was a staple for them. Gumbo, a type of stew, and Jambalaya which is made with vegetables, meat stock, and rice, are two popular foods of the Cajun cuisine.

A typical Cajun meal consists of three pots―(1) the main dish, (2) steamed rice and a grain dish or fried cornbread, and (3) vegetables. Earlier, Cajun food was considered as the food of the poor immigrants. But with time, as more immigrants settled in southern Louisiana, they brought with them their own spices and methods of cooking, and transformed the bland food into a spicy delight. A blend of these ingredients combined in one pot became the staple diet of the immigrants and a part of the Cajun cuisine.

The most commonly used vegetables are onions, celery, and bell peppers, popularly called ‘the Cajun trinity’, and are mostly always sauteed together. Smoked meats are also popularly used. There are various methods of cooking Cajun dishes like barbecuing, boiling, pan frying, smothering (cooking the vegetables or meat on low heat and with low amounts of water or stock), fricassee (also called stewing), and deep frying. Étouffée is a popular dish made with a seafood like crawfish, crabmeat, or shrimp, along with vegetables. Roux, a combination of all-purpose flour and oil, is used to give a thick consistency to stews and other dishes. Special seasonings like dried scallion powder, cayenne pepper, bay leaf, and parsley are added to the recipes for a delectable flavor.

Preparation:
In a large saucepan, melt the butter and saute the onions and celery until the onions turn a light golden-brown. Add Creole seasoning, cayenne pepper, garlic powder, and salt. Cover the saucepan and allow the mixture to simmer for about 20 minutes on a low heat. In the meantime, take a small bowl, whip the heavy cream and egg yolks together, and keep aside. Remove the cover of the saucepan, add the flour, and cook for another 5 minutes while stirring continuously. Stir in the egg yolk mixture, both the cheeses―American and cheddar―and cook until the cheese melts. Remove the saucepan from the heat, add the cooked crabmeat, and combine properly. Transfer this mixture to a greased baking dish, top it with the green onions and sharp cheddar cheese, and bake it in a preheated oven for about 20 minutes until the cheese bubbles and turns a light brown.

Smoked Sausage with Vegetables and Tomatoes

Preparation:
Slice the sausage and fry the slices in a pan until they are cooked and turn a light brown. Remove the sausage slices from the pan, and add the vegetables and minced garlic. Continue to fry for about 2 minutes. Stir in the tomatoes, basil, and oregano. Now, combine the sausage with the vegetables and cook for about 5 minutes while stirring occasionally. Sprinkle the shredded cheese on top and serve with cooked rice.

Cajun food has been passed down as an heirloom for many generations and is enjoyed across the globe. 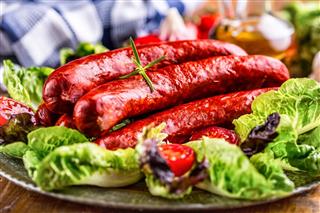 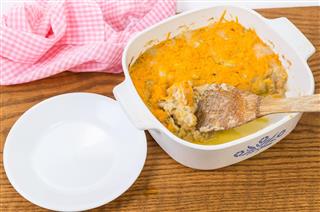