Have you ever heard of a double-acting baking powder? I am guessing that the answer is a negative, and you are not absolutely sure. Perhaps, that is what brought you to this page. It is essentially baking powder but its acidic properties are somewhat different. 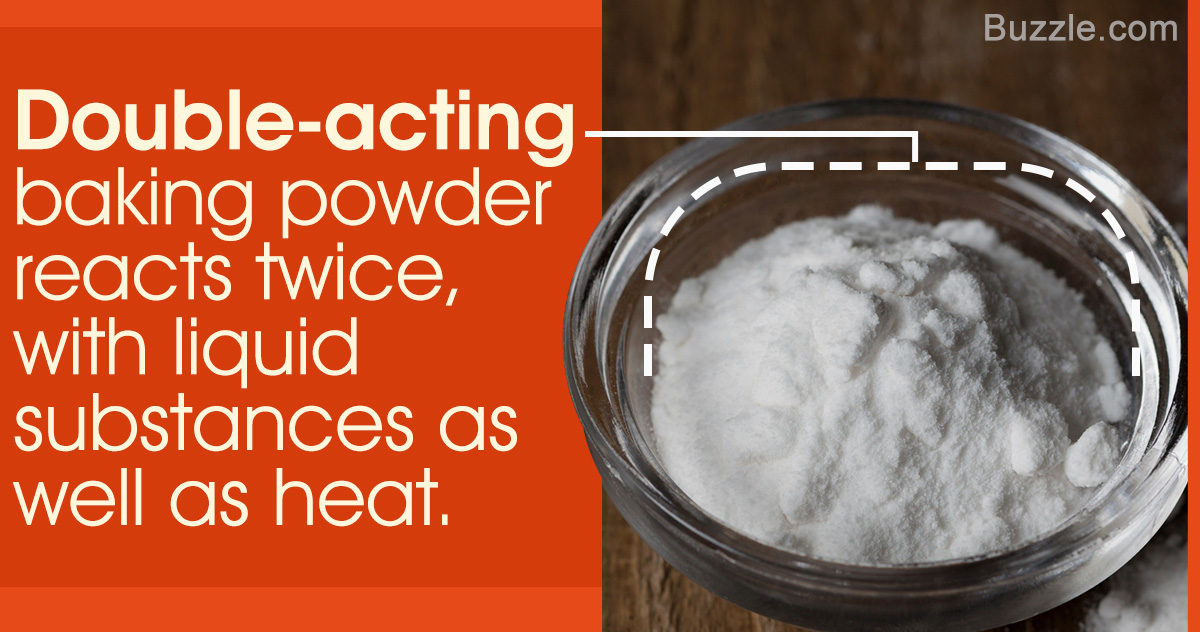 Have you ever heard of a double-acting baking powder? I am guessing that the answer is a negative, and you are not absolutely sure. Perhaps, that is what brought you to this page. It is essentially baking powder but its acidic properties are somewhat different.

Baking powder is commonly used in households, mainly for baking purposes. It quickly releases carbon dioxide and helps the batter to lighten and rise as it bakes. Baking powder is a preferred leavening agent over yeast that’s used for fermentation of the batter. It does not leave a bitter taste when added for baking purposes. There are two types of baking powder available in your supermarket’s aisle; a single-acting and a double-acting. Single-acting powder is that which is required to be added to the batter immediately, after mixing the ingredients. If you plan to add this baking powder to the dough, you cannot let it stand at all even for a few minutes else all the carbon dioxide released from this reaction will be lost and your batter will not rise well. But these days, a single-acting baking powder is less commonly used. In fact, it is quite likely that the baking powder you have been using is a double-acting one because this variety of baking powder is now extensively sold in the US supermarkets and you may not have even realized this before picking it up while grocery shopping.

What is a Double-acting Baking Powder?

As the name suggests, double-acting reacts twice the way baking powder does. This happens in two stages, when it interacts with liquid substances as well as heat. The first phase of this chemical reaction occurs immediately when you mix this powder with a liquid such as water or a semisolid form such as the batter for baking. But, before I proceed to describe this process, it must be known that the double-acting powder contains two types of acids that cause such a phenomenon to take place at two different times. A dry acid that reacts very quickly at a normal temperature when liquid is added, and the other is a slow-acting acid, that reacts slowly and at a higher temperature.

A double-acting powder contains cornstarch, soda bicarbonate, mono-calcium phosphate (MCP) and may or may not include sodium aluminum sulfate (SAS)/sodium aluminum phosphate (SALP)/sodium aluminum pyrophosphate (SAP), depending on the brand. These acids are classified as “generally regarded as safe” (GRAS) by the FDA. The MCP is of two types: mono-hydrate, which quickly reacts when it comes in contact with moisture and, anhydrous, which reacts with the rise in temperature. The gases during the two reactions are released while the process of mixing of the batter and baking takes place. Double-acting powder does not contain cream of tartar.

In the first stage of the chemical reaction, the double-acting powder reacts with the liquid or the moisture present in the batter at room temperature. The baking soda present in it dissolves and leaves gases. These gas bubbles help to raise the batter. However, it is the second stage wherein most of the reaction takes place and maximum gases are released. In this stage, the batter is heated during the process of baking. The rise in temperature causes this powder to further react with the batter and release more carbon dioxide. Let’s say, this variety of baking powder is a more powerful form of the single-acting baking powder.

A common question among amateur cooks and bakers is that whether a double-acting baking power can be used if the recipe does not specify the type of baking powder required. If the label on your baking powder says it is double-acting, do not reduce the quantity of the ingredient as required by the recipe by half! You must use the exact amount. If your recipe only mentions ‘baking powder’, it is most likely calling for a single-acting baking powder. However, your judgment is also needed. If you think that the batter needs to be raised a lot, or needs to be refrigerated before baking, go ahead and use the double-acting powder. Do remember that, it can leave your batter dry if used inappropriately.

Please note that, the double-acting variety cannot be used as a substitute for the single-acting baking powder. Also, you cannot use baking soda independently as a double-acting substitute.