7 Readily-available Substitutes for Grains of Paradise

Grains of paradise are used as a flavor in numerous recipes. However, it can be hard to find in stores, and if you are wondering if anything can replace this spice, then you are at the right place! We'll tell you about several substitutes for grains of paradise, that are already in your kitchen.

Grains of paradise are used as a flavor in numerous recipes. However, it can be hard to find in stores, and if you are wondering if anything can replace this spice, then you are at the right place! We’ll tell you about several substitutes for grains of paradise, that are already in your kitchen.

Fact of the Matter

The name ‘grains of paradise’ comes from a marketing myth in the Middle Ages, where traders would tell customers that these seeds grew in paradise, and had to be collected from the rivers that flowed out of it.

Grains of paradise are small, cardamom-sized seeds which taste like pepper, and have a lingering hotness and an aftertaste of cardamom. This spice finds good use in steaks, grilled meats and vegetables, salad dressings, egg-based dishes, besides many others.

Originally grown in Africa, this spice was popular in the Middle Ages as a substitute for pepper, until finally pepper became cheaper and this spice was slowly pushed off the shelves. Even today, it is more common in parts of Western and Eastern Africa as compared to the West. Also called Melegueta pepper, these are generally available in seed form, and are supposed to be crushed before use.

With so many culinary uses, it’s better to have other alternatives in mind, as given below.

As a Substitute in:Sausages, meats, curries, cakes, and beverages.

Appearance
Cardamom is available in green- or brown-wrinkled pods which are half to two centimeters in length, containing blackish seeds. White pods are also available. Buying whole pods retains flavor for a longer period of time. However, the seeds may be sold loose or ground.

Flavor
Cardamom is generally strong, smoky, minty, and may be spicy-sweet or hot depending on the variety. Green cardamom is cooler than its black or white counterparts. The seeds are more intense in flavor, while the pod covers carry little to no flavor. Cardamom stored in airtight containers will retain its flavor for a long time, even years.

Appearance
Black peppercorns are spherical, dried fruits, about one-fourth of an inch in diameter, are red in color when ripe, and shrivel and darken on drying. The fruit contains a single seed. It can also be used in a powdered form.

Flavor
Black pepper is very strong, pungent, and aromatic in flavor, with a rich feel. If stored as whole as a peppercorn, the flavor is retained for a longer period of time. The black variety is the strongest, yet, with a tinge of sweetness.

Flavor
Sansho powder has a sharp, tangy, and lemony flavor, with an electric, tingling sensation that feels like numbness. This spice has a strong aroma.

Flavor
Pink peppercorns have a strong, fruity, citrus-like, and peppery flavor, but are not hot (since they are not true peppercorns). The spice has a sweet fragrance.

Appearance
Green-colored, spherical, dried fruits with a wrinkled cover, and of the same size as black peppercorns. This is also available pickled in brine solution or in a powdered form.

Flavor
Green peppercorns are spicy, pungent, and acidic, with a fresh and lively flavor, and a peppy aroma. They are less hot and pungent as compared to black peppercorns.

Flavor
The herb has an acidic, hot flavor, with a lingering aroma. The hotness doesn’t last very long.

Flavor
It has a complex, fresh flavor and delicious aroma. Distinctive flavor of each peppercorn variety is noticeable―boldness of black, mildness of white, sharpness of green, and fruitiness of pink peppercorns.
Other Uses
Dips, spreads, viniagrettes, meats, vegetables, pasta, egg dishes, salad dressings, sauces, and marinades.

The common thing that most of these alternatives share with grains of paradise is the pungent aroma and spicy flavor, though some have a lemony tinge as well. Due to this similarity, most substitutes can be used as a general replacement for Melegueta pepper in most dishes. 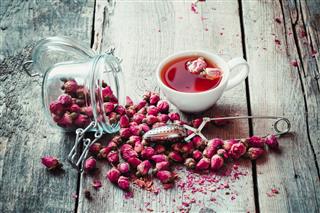 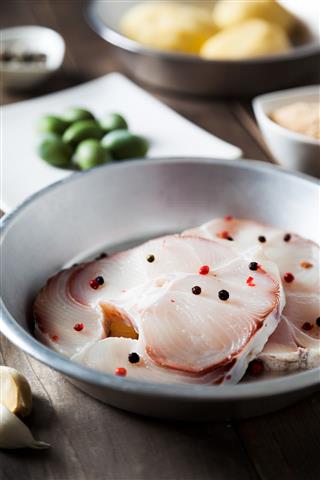