Steak with milk may not be a favorite combination for everyone, but it sure tastes delicious when served with a thick milk gravy and mushrooms. Take a look at the following article if you want to know more such delicious dishes.

Steak with milk may not be a favorite combination for everyone, but it sure tastes delicious when served with a thick milk gravy and mushrooms. Take a look at the following article if you want to know more such delicious dishes.

Milk steak originated in the American culture and has gained a lot of popularity all over the world, due to its unique taste. For those of you who are wondering what this is, it is the spiced up milk gravy that is absorbed by the steak which is cooked in it. This gives a unique blend of two opposite tastes, that is extremely aromatic and flavorsome. It is a dish which is very occasional and is not made in households often. But when cooked, the aroma of the milk gravy and roasted steak is unbearable to control. Though the meat may take some time to cook in the gravy, but once it’s made, you won’t want to wait till it is served. Mentioned below are a few mouth-watering recipes.

Delicious Recipes to Choose From

There are many ways to make this dish and it can differ regionally. Some recipes may have steak boiled in a milk gravy or some may have the gravy poured over it. You can also make many combination of ingredients like, vegetables and dressings on the served dish, just to get a completely different flavor. Find some interesting recipes mentioned below and try any one you like.

Directions
With a pinch of salt and black pepper, season the meat and set it aside for about half an hour. Then take a dish and mix the flour and pepper, and coat the pieces of meat in the flour one by one. Dip them in a bowl of beaten eggs and then again coat with the flour. In a large heavy skillet, heat the lard over medium flame and fry the steaks for 4 to 5 minutes on each side, till they are golden brown in color.

Remove and keep them aside. In the same skillet take oil and sprinkle 2 tbsp. of flour in it. Let the flour turn a bit brown and then scrape it and add to the bowl of milk. Stir this mixture well till the batter gets a smooth texture. Gradually whisk the milk and cook it for 3 to 4 minutes, till it is thickened. Add the salt and pepper. The gravy should be very aromatic. Then you can either add the steaks in the gravy or pour the milk gravy over them.

Directions
Place the steaks on an unheated broiler pan and broil it, 3 inches from the heat, for about 8 minutes. Turn the sides of the meat and cook it evenly on both sides. It should be golden brown in color. In a sauce pan, cook the mushrooms, carrots, and onions in hot oil, till all of them become tender and get cooked. Then add the salt, thyme, basil, and pepper. Stir well to blend the tastes. In a small bowl, add the cornstarch, milk, and then add this mixture to the mushroom pan. Cook it till the gravy becomes thick. Serve it over the steak pieces in a serving plate with mushrooms on the side. 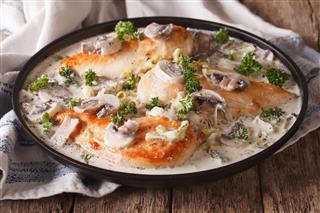 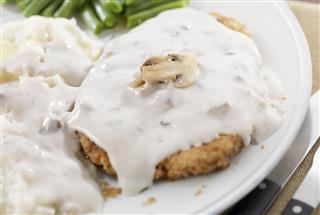