Culinary Uses and Other Benefits of Currants

A rich source of phytonutrients, currants belong to the gooseberry family. They are often used in drinks and desserts due to their wonderful flavor. This Tastessence article enumerates the culinary uses and health benefits of currants.

Home / How To Make / Culinary Uses and Other Benefits of Currants

A rich source of phytonutrients, currants belong to the gooseberry family. They are often used in drinks and desserts due to their wonderful flavor. This Tastessence article enumerates the culinary uses and health benefits of currants.

Being a vector of white pine blister rust, black currant farming was banned in the United States in the early 1900s. This ban was lifted from New York in 2003, while it still exists in some other states.

In botany, the term ‘berry’ refers to a fruit that comprises pulp and seed produced by a single ovary. Currants are placed under the category of berries. Black, red, and white currants belong to the Ribes genus and Grossulariaceae family. The botanical names of black currant and red currant are Ribes nigrum and Ribes rubrum, respectively. It must be noted that the white currants are a result of chromosomal alteration or mutation in red currants. White currants score better in terms of flavor or sweetness, when compared to black currants. Most people prefer to use black currants in jams, jellies, syrups, etc., rather than consuming them in their raw form. This is due to their sour or tangy flavor. However, some varieties might be sweeter. These are a very good source of various phytonutrients, vitamins, and minerals. Besides being a powerhouse of nutrients, these berries are often used for imparting flavor or garnishing desserts. Red, pink, and white currants might also be of value to gardening enthusiasts because of their ability to lend visual interest.

Unlike black currants that not consumed directly, red, pink, or white currants can be eaten in their raw or dried form. 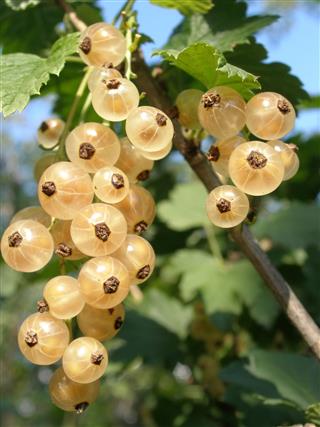 Liquor made from black currants

Liquor made from red currants

Jam made from currants

Though many cooking enthusiasts might use these berries as flavoring agents, these berries are packed with nutrients as well. As per the USDA database, 100 g of raw, red and white currants contain the following nutrients:

Both black and red currants are a rich source of various vitamins, minerals, and nutrients. However, black currants have more to offer, in terms of nutrients. Several health benefits have been associated with the consumption of fresh currants. These are due to the presence of phytonutrients such as:

✦ The term ‘flavonoids’ refers to a class of plant pigments that are known to possess antioxidant properties. Flavonoids present in currants include cryptoxanthin, zeaxanthin, and beta-carotene.

✦ Currants are a very rich source of vitamin C. You can easily fulfill the body’s daily recommended intake of vitamin C by having a cup of black currants. The presence of vitamin C not only improves the antioxidant capacity of these berries, but also helps in the absorption of iron.

✦ Being a good source of fiber, these also help in improving the digestive health.

✦ Consuming them can help lower the risk of damage caused by free radicals. Free radicals are substances that cause oxidative stress, thereby affecting the cells in an adverse manner. Free radicals can cause premature aging, and make one susceptible to serious diseases.

✦ The health benefits of black currants can also be attributed to high levels of phenolic flavonoid phytochemicals called anthocyanins. These compounds can help protect the body from aging, inflammation, and neurological diseases.

✦ 100 g serving of fresh currants provides 230 IU of vitamin A, which plays a vital role in keeping the skin, mucous membranes, and eyes healthy.

✦ 100 g serving of fresh black currants provides about 20% of daily recommended intake for iron. Including iron-rich food items is essential for staying healthy, as this mineral is essential for the production of red blood cells. It is also needed for other essential bodily processes.

✦ Currants are also a very good source of potassium, which is why consuming these berries might prove beneficial in case of individuals affected by hypertension.

✦ The application of black currant seed oil is believed to help alleviate the symptoms of eczema and psoriasis to some extent.

✦ Gamma-linolenic acid (GLA) present in black currant seed oil is believed to help in reducing inflammation in the body.

✦ These berries are also a good source of other essential minerals such as copper, calcium, phosphorus, manganese, and magnesium.

✦ Red currants are known to possess antipyretic properties. Thus, these can help in reducing fever.

On a concluding note, currants are a wonderful source of vital nutrients that are essential for the healthy functioning of the human body. So, do not just use them to garnish desserts, include these berries in your diet to stay healthy.