30 Best Toast Toppers You Must Try for a Yummy Breakfast

The humble toast remains one of the simplest dishes in the world, albeit with a multitude of variations. This Tastessence post enlists 30 best toast toppers from around the globe that you must try. 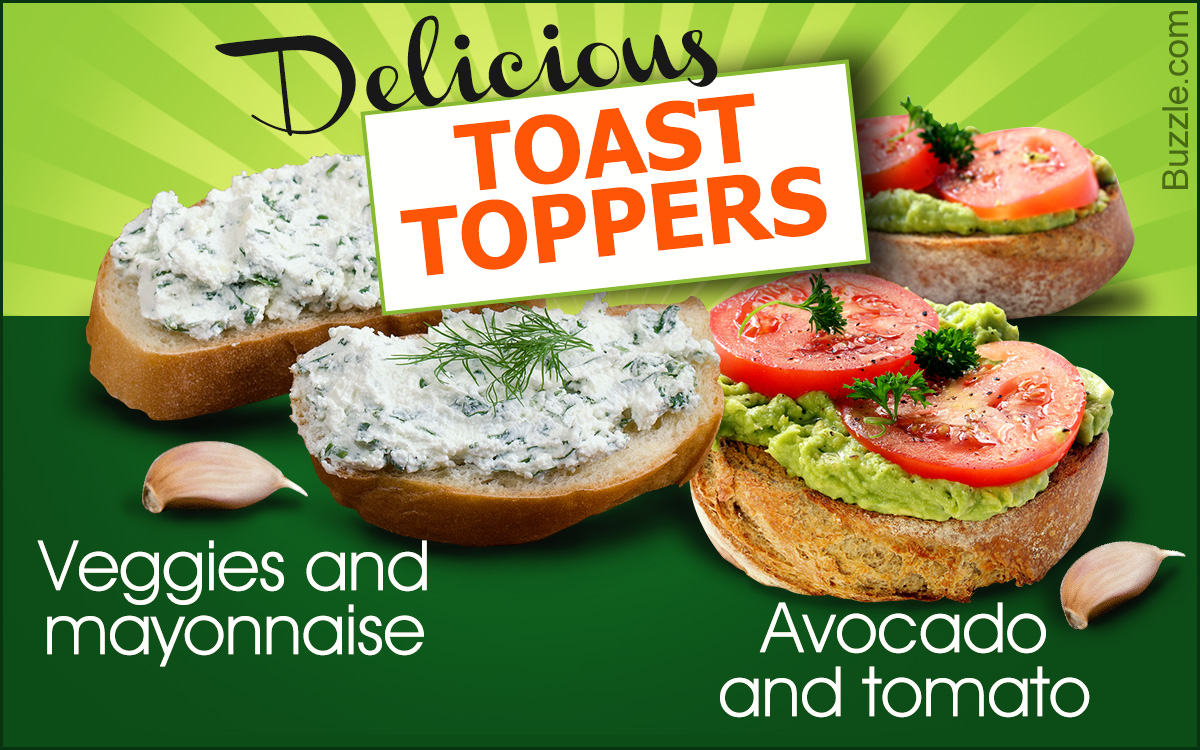 The humble toast remains one of the simplest dishes in the world, albeit with a multitude of variations. This Tastessence post enlists 30 best toast toppers from around the globe that you must try.

Bread toast is one of the most common breakfast dishes worldwide. It is an indispensable dish for those who love to experiment, taking precedence as the prerequisite for inventing innovative and delicious combinations for toppings. And of course, there are different types of bread―French bread, Italian bruschetta, rye bread, cinnamon bread, and so on.

While sandwiches are a different ball game all-together, open toasts are a desirable option for quick bites. Grill a slice a bread and top it up with anything … and I do mean, literally anything you like. You’d be surprised how enticing even simple combinations on toast can be.

The paragraphs below enlist some savory toast topping ideas. Some of them are common, tried-and-tested recipes, while others include some unique combinations.

One of the simplest combinations on toast is that of tomatoes and basil. Take slices of warm, toasted Italian bread and top them with finely chopped tomatoes, cream cheese, and basil. Drizzle with olive oil and serve.

Finely grate beetroot, chop some red pepper, and toss some peanuts into the mixture. Spread on toast and garnish with parsley.

One of the most unusual combinations perhaps, yet deliciously tempting. Grate some cheese on top of toasted loaves, top up with fresh sliced figs, and grill. Sweet and chewy! Yum!

It is a kind of open toast that originated in France. It consists of a simple toast topped with melted cheese and a fried egg. One bite and it’s gone!

It is another of those unique ideas for toast toppers. Chop little bits of ham and mix them with grated cheese. Spread on toast and grill for a while. Serve hot.

You will need a perfectly boiled egg here. Layer a toast of brown bread with cress and top up with boiled egg slices. You may add sauce or cheese or mayo or any other topping you wish.

This is one of the most healthy vegan toast recipes. Scoop the flesh of the avocado and make some guacamole. Spread over warm toast. Top up with chopped tomato pieces.

For this recipe, take a thick slice of crostini, a type of Italian bread, and layer it with a thick slice of gorgonzola, the buttery Italian blue cheese. Top up with sliced and roasted grapes and thyme. One of the most unique toast toppings out there, you’ll relish every bite.

Simple and efficient is what one could describe this topping. Slice up some tomatoes and peppers. Layer them over toast. Spread some mayonnaise. Top up with chopped spring onions. A wholesome meal by itself.

This is one of the most yummy, lip-smacking toppings ever! Melt some cheese and minced garlic in a bowl, just enough to form a slightly runny, slightly firm mixture. Spread some of this topping on a thick toast and top with dill. You will crave for this!

Avocado is by far one of the most convenient toppings for toasts. Spread a toast with runny butter and top up with slices of avocado. Place a shrimp over each toast and serve.

Take a thin layer of toasted rye bread. Spread butter all over and layer with lettuce. Add some salami and cheese slices, and top up with sliced tomatoes. Serve warm.

There are innumerable recipes you could try with tuna. For a simple version, toast a thick slice of bread. Take some ground tuna fish and mix with Worcestershire sauce, white sauce, and nutmeg. Spread the creamed tuna on toast and enjoy!

Mix some mayonnaise, minced garlic, salt, and beaten egg yolk into a smooth sauce. Now, spread the thick, smooth sauce on a slice of bread and serve.

Hummus is one of the most convenient toppings for toast. Mash some boiled chickpeas and stir in some lemon juice, salt, olive oil, and garlic. Spread on top of a toast and garnish with a leaf of parsley.

Young or old, you will not find anyone who turns away from this recipe! You can either purchase readily available chocolate spread from the store or make some yourself. Melt some dark and white chocolate bars, stir in some whipped cream, and spread it on a slice of warm toast. Delicious!!

A simple recipe that is very often served for breakfast. Mix some butter and zesty orange marmalade, and spread the mixture on toast. Sweet and filling.

Generously spread some cream cheese on a toast slice and drizzle with honey. That’s it! You may add chopped nuts or chocolate shavings.

One of the oldest and common toast recipes, an authentic French toast is made by dipping a slice of bread in beaten egg and then roasted on a pan. You may top this with anything you wish; one of the most delectable toppings is a combination of golden butter and marmalade.

Butter a slice of toast. Open a can of kidney beans and layer them over the toast. Dig in.

It is a very simple and easy-to-make recipe. Take triangular pieces of brown bread toast. Spread thick peanut butter on them and top up with banana slices. Yummy! 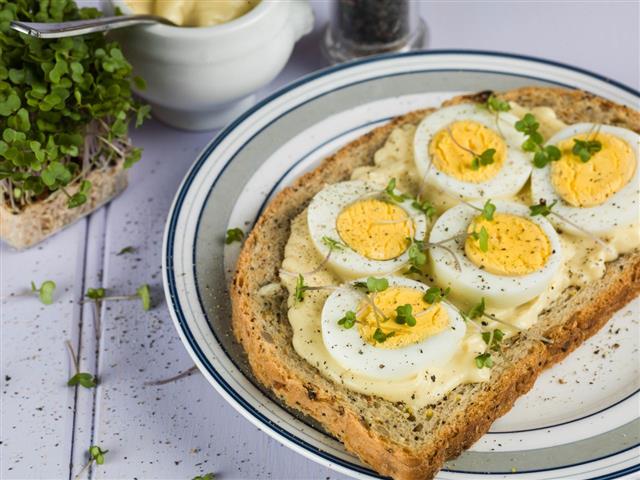 Spread a thick layer of grated cheese over a slice of bread. Grill until the cheese melts. Layer with boiled egg slices and serve with a garnish of celery sticks or herbs.

Poach an egg to perfection. Spread butter on a thick slice of toast and place some salad leaves on top. Gently place the poached egg over the leaves and garnish with refried beans and red pepper slices. Serve with mustard sauce.

Slice some mushrooms and sauté them in butter. Toss some salt and pepper and serve browned mushroom on a slice of toast. Garnish with parsley.

As mentioned earlier, French toast can be accompanied by a variety of toppings. To make apple toast, make a simple French toast with very thin slices of brown bread. Slice an apple and lightly fry the slices in butter. Spread some cream cheese on top of the French toast and top with the apple slices.

Grate fresh cottage cheese and stir in some butter. Layer a toast slice with the mixture. Sprinkle some black pepper and garnish with fresh radish slices and thyme.

Take some finely chopped onions and fry them in butter. Spread avocado sauce on a bread slice. Top with a slice of ham and layer the onions. Grill for a few minutes and serve warm, with a piece of avocado.

Take a slice of crostini toast. Top with salmon slices and grill for about 10 minutes. Serve warm, garnished with dill leaves.

For the caponata, cook chopped onions and eggplant slices in olive oil, and add chopped tomatoes, olives, vinegar, and raisins. Take a thick slice of bruschetta and toast well. Spread the caponata on top and garnish with pine nuts.

Spread some butter on toast. Spread a thick layer of any jam of your choice on the toast. You may use strawberry jam, raspberry jam, apricot jam, etc. Serve as a dessert or sweet breakfast. You may also drizzle some applesauce on top.

The list of toppings can be never-ending. You can experiment with different ingredients of your choice. Try spicy variants containing chillies and smoked meats, or sweeter variations, like apricot cream and strawberry slices. Use your own creative ideas and dig in!